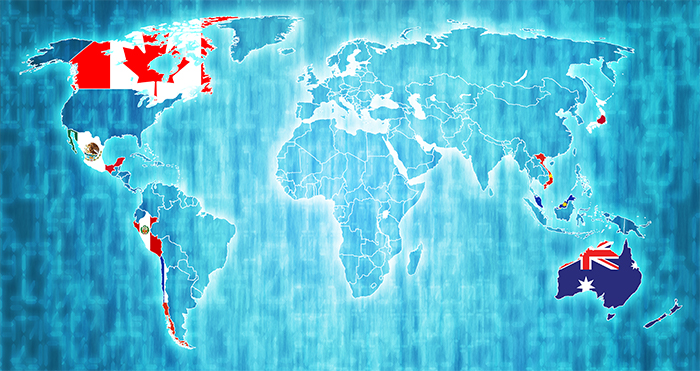 The Comprehensive and Progressive Agreement for Trans-Pacific Partnership (CPTPP), as discussed in our blog post What Does CPTPP Stand For? | CPTPP FAQ is a new free trade agreement between Australia, Brunei, Canada, Chile, Japan, Malaysia, Mexico, New Zealand, Peru, Singapore and Vietnam.

The last Pacific Rim Trade deal went dead two years ago when the U.S. withdrew from the Trans-Pacific Partnership. All original TPP signatories, with the exception of the U.S., agreed to revive the TPP and reached an agreement in January 2018 to move towards the CPTPP.

The agreement specifies that its provisions enter into effect 60 days after the ratification by at least 50% of the signatories (six of the eleven countries). The sixth country to ratify the deal was Australia on October 31, 2018 and the agreement now coming into force with the initial six countries on December 30, 2018. The six countries are Canada, Japan, Mexico, New Zealand, Singapore and Australia. The remaining signatories; Brunei, Chili, Malaysia, and Peru will not be bound or benefit from the CPTPP until they ratify. Vietnam recently signed on, is now a signatory and will start benefiting from the agreement after their 60 days has passed. Peru is expected to ratify before 2019.

Canada is the first and only G7 nation with a free trade agreement with the other six. It is another way Canada hopes to diversify its trade with a longer-term goal of less reliance on the U.S. consumers for Canadian goods and services. Even without the U.S. involvement, the CPTPP represent about 13% of the world's gross domestic product. Should the U.S. reconsider and join the CPTPP the bloc would represent 40% of the GDP.

Two thirds of the provisions in the Comprehensive and Progressive Agreement for Trans-Pacific Partnership are the same as the TPP draft.

The benefits of the free trade agreement for Canada are best explained in the Government of Canada Overview and Benefits of the CPTPP.

There are two sectors that are not exactly sold on the CPTPP for Canada and they include the auto manufacturers and dairy industry. The Canadian government argues the CPTPP will help Canada retain its strategic advantage for their supply chains over the increasing competitiveness of China.

How Canada will implement this new agreement is contained in Canada Border Services Customs Notice 18-22.

How To Claim CPTPP?