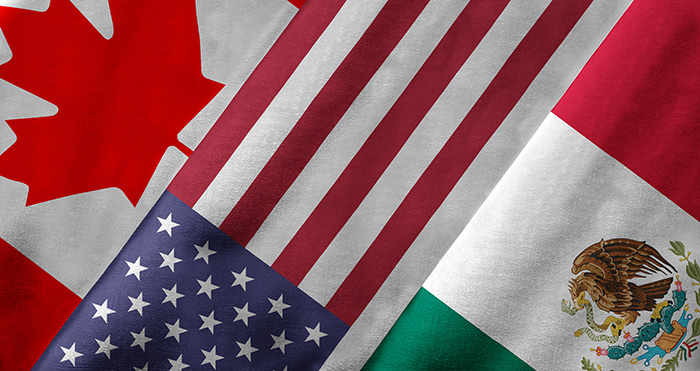 The North American Free Trade Agreement (NAFTA), is a multilateral free trade agreement between the United States, Canada and Mexico.

When the agreement came into effect in 1994 it created the world's largest free trade zone, and laid the foundation to strengthen the relationship between Canada, the U.S. and Mexico by supporting their shared economic growth.

As intended, it has proven to improve international relations between these three countries by eliminating most tariff and non-tariff barriers to investment and free trade.

The Office of the United States Trade Representative (USTR) reported that in creating the world's largest free trade area, the agreement has now linked 450 million people who produce $17 trillion in goods and services. Since its inception, the effect of the agreement has more than tripled the amount of merchandise trade between these countries.

"NAFTA recognizes the reality of today's economic-globalization and technology.  Our future is not in competing at the low-level wage job; it is in high-wage, new technology jobs based on our skill and our productivity."

Are My Goods NAFTA Eligible?

Only goods that meet specific requirements are eligible for preferential tariff treatment. In order for goods imported into the U.S., Canada or Mexico from one of the other NAFTA countries to qualify, they must satisfy the following:

Top 5 Mistakes When Completing A NAFTA Certificate Of Origin

As a free trade agreement it has greatly impacted trade between the U.S., Canada, and Mexico by breaking down barriers to trade and saving importers and exporters considerable costs. By eliminating or reducing duties it has lowered the cost of doing business internationally, and aided trade partners in being competitive in cross-border markets.

The exporter is responsible for fully completing the Certificate of Origin, also referred to as the NAFTA Certificate. If you are exporting or importing eligible goods and you are not the producer or the manufacturer, request a copy of the original Certificate to be used as a basis for filling out your own certificate.

As with other preferential trade programs, the importer bears responsibility to claim the benefits. A claim for preferential treatment is done when the Certificate of Origin is supplied with the customs documents used when the goods enter Canada, Mexico or the United States.

The agreement creates a free trade area, not a common market. Customs administrations will still exist and goods entering Canada, Mexico or the United States must still comply with each country's laws and regulations. Importers need to be aware the agreement does not allow for the unchecked movement of goods among Canada, Mexico and the United States.

How Can I Take Advantage Of NAFTA And Other Free Trade Agreements?

If you need assistance in determining if your goods qualify, or if you have questions on how to fill out the NAFTA Certificate of Origin, please contact one of our Trade Compliance Specialists. They will help you take full advantage of the benefits provided.

April Collier is a Trade Compliance Specialist with PCB Customs Brokers USA with over 36 years of experience in international trade. April has been a valued member of the PCB team for 18 years, having taking the lead in implementing the Compliance department for US imports. Her current responsibilities include advising and coaching clients on a variety of regulatory compliance matters, and include expertise in Antidumping & Countervailing matters. In addition to her regular duties, April is also the CTPAT coordinator for PCB.

Author's Posts
Is Canada's Softwood Lumber Industry Facing A Cold Blow From The South?
What Is The North American Free Trade Agreement? | NAFTA
Update On Wood Packaging Materials Moving Between Canada And USA
While we strive for accuracy in all our communications, as the Importer of Record it is incumbent upon your company to ensure that you are aware of the requirements under the new regulations so that you maintain compliance as always.