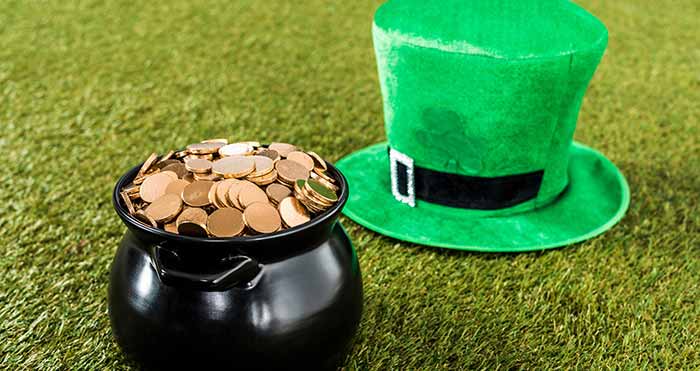 St. Patrick's Day, the holiday that started from Saint Patrick, a 5th-century missionary. Today we know it as a celebration of Irish culture. St. Patrick's Day is unique because, according to Time, it is globally the most celebrated national holiday. The Irish who have dispersed around the globe have brought their culture along with them; however, the Irish have more than just fun culture to offer. In this post you will take a look at how a beautiful country with wonderful people has positively contributed to the world of trade.

If you were to visit Dublin, Ireland and walk along the Dublin Docks you would be doing a double take on where you are. The docks are lined with large, futuristic buildings that don't make you think about the quaintness of Ireland, but rather the tech giants of Silicon Valley. This is because Ireland has attracted the biggest and brightest U.S. tech companies. How? With the most profitable tax rates. Ireland is the world's most profitable country for U.S. corporations. With a corporate tax rate of only 12.5% companies like Apple, Facebook, Google and Twitter have large offices located on the Dublin Docks. U.S. corporations receive benefits from the lower corporate tax rates while being able to pull from an English-speaking pool of potential employees.

In the early 1970's, an exploring team discovered the Tara Mines. You might be thinking what is special about the Tara Mines, Ireland and trade? The Tara Mines contain the largest amount of zinc found in Europe and is the 9th largest zinc mine in the world. Zinc is important because it is used to galvanize other metals. This helps prevent metals such as steel and iron from corroding or rusting.

The Tara Mines also contain a large amount of lead, specifically the 2nd most in Europe. Lead is important because it is used in many items we use on a daily basis includeing car batteries, ammunition, weights, radiation protection and paints.

The beneficial tax rates not only helped attract top U.S. tech companies, but also the pharmaceutical industry. Amazingly, Ireland has 9 of the top 10 largest pharmaceutical companies in the world. Even at the low corporate tax rates of 12.5% Ireland receives over 1 billion in corporate tax every year. Every time you take some medicine for an ailment or allergic reaction, there is a very good chance the best and brightest in Ireland lent a helping hand.

Ireland's main economic resource is its large fertile pastures. Just under 10% of all Irish exports are agricultural foods and drinks. The beautiful natural scenery throughout Ireland lends itself to over 5 million sheep and just under a million cattle. Interesting fact, there are more sheep in Ireland than people.

The Luck Of The Irish

The Irish have a lot to be proud of. Not only do they have wonderful people, with a fun-loving culture, but a strong export economy that helps many people in many countries. If you want to explore your options and import products from Ireland or Northern Ireland, contact us to see how a trade advisory expert can help you. The luck of the Irish may be on your side.

Gina Crews has over 25 years of US and Canadian Customs brokerage experience. Following a whirlwind nationwide tour providing sales and marketing support to Warner Brothers for their "Bugs Bunny Film Festival," Gina entered the logistics & brokerage industry. With an entrepreneurial heart, Gina has been a small business owner herself a few times over and now helps small and medium-sized businesses understand the cross-border process. Gina holds her US Certified Customs Specialist designation, is a dual citizen of the US and Canada fully versed in Customs regulations for both Countries.

Author's Posts
St. Patrick's Day And Irish Trade
How To Import For A Trade Show In The U.S. Or Canada
Top 5 Mistakes When Completing A NAFTA Certificate Of Origin
How To Import Personal Belongings Vs Casual Goods
CBP Vs. CBSA Valuation History
While we strive for accuracy in all our communications, as the Importer of Record it is incumbent upon your company to ensure that you are aware of the requirements under the new regulations so that you maintain compliance as always.